There is a pretty steep learning curve when you start to see all of the different things that you can do in Microsoft Excel. It’s an incredibly powerful application with a nearly infinite number of potential uses.

But one of the more useful things that you can do is learn how to subtract in Excel. Being able to compare data cells with one another and find the difference between them is something that you will find yourself doing, even in more complex formulas and worksheets.

How to Use the Subtraction Formula in Excel

Continue reading below for more information on how to subtract in Excel, as well as view pictures of these steps.

Microsoft Excel can do more than just store and sort data. You can also compare data and use mathematical functions. This means it’s possible to add, subtract, divide, and multiply in Excel 2013.

You can use combinations of these functions to generate percentage values. if you need to know how to do this, then check out our how to calculate percentage in Excel article.

Learning how to use some of the common mathematical operations, like subtraction, in Excel 2013 with a formula will provide you with a gateway into the world of Excel formulas. There are a number of different calculations that Excel is capable of performing, many of which can save you a lot of time if you regularly work with Excel spreadsheets.

This article will provide a brief overview of the Excel subtraction formula, plus some examples of that formula that you can apply to your own spreadsheets.

Specifically, we will focus on subtracting in Excel 2013 by specifying two cell locations that contain numerical values.

You can read our Microsoft Excel tutorial on how to add columns if you’ve been looking for an easy way to generate totals for an entire column of values.

The steps in this tutorial assume that you have a cell containing a value that you want to subtract.

You can either subtract this value from a value in another cell, or you can subtract it from a number that you select.

This simple formula is very versatile, and we will show you a couple of other ways that you can use it at the end of the article.

These steps will show you how to subtract in Excel spreadsheets.

Step 2: Click inside the cell in which you want to display the result from your subtraction formula. 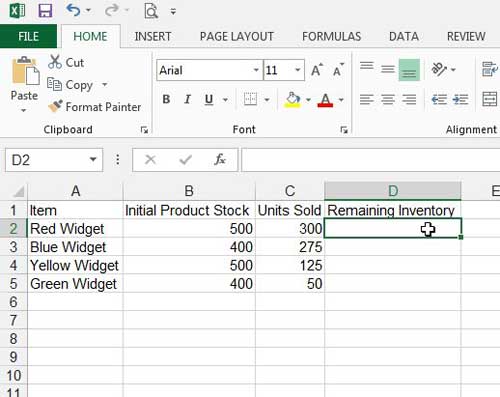 Click on the cell where you will be entering the formula.

I am going to display my result in cell D2 in the example below. Excel cells are referred to by their column and row location. So cell D2 is in column D and row 2.

Step 3: Type =B2-C2 into the cell, but replace B2 with the location of the first cell that you will be including in your formula, and replace C2 with the cell location that you are subtracting from your first cell. Press the Enter key on your keyboard after you type the formula, and the subtraction result will be displayed in the cell. 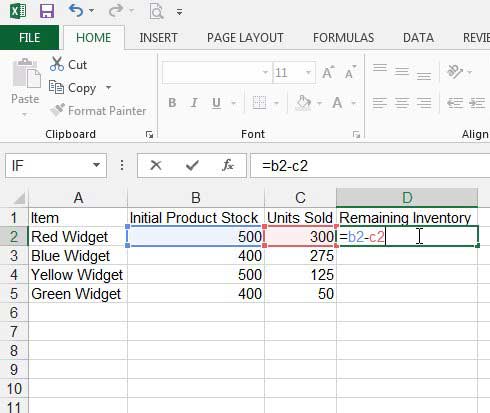 Enter the formula into the cell, such as =a2-b2, then press Enter.

If you want to subtract a cell value from a number that is not in a cell, simply replace one of your cell locations with that number instead.

For example, the formula =100-B2 would subtract my value in cell B2 from 100. The important thing to remember when you are learning how to subtract in Excel is that subtracting one value from another requires four basic components.

While we have specifically learned about Excel subtraction when at least one of the values is a cell location, you can also use the subtraction formula to subtract two numbers. For example, typing “=10-3” will display “7” in the cell, despite the fact that no cell locations were present.

How to Subtract Two Numbers in a Cell in Excel

In the sections above we showed you how to subtract in Excel when you had cells that contained values. But what if you want to subtract two numbers in a cell by themselves?

The process for achieving that result is very similar to what we learned in the section above.

How to Subtract a Range of Cells in Excel

While we have focused on subtracting a value of one cell from another cell in the steps above, you can also subtract a lot of cells from a starting value as well. This is accomplished with the help of the SUM function that will add together values in a cell range.

How do I subtract multiple cells in Excel?

So the formula for subtracting multiple cells in Excel would look something like =A1-SUM(B1:B5).

How do I add and subtract in Excel in one formula?

You need to incorporate parentheses into your formulas if you wish to add and subtract in the same formula in Excel.

For example, the formula of =SUM(6+7+8)-5 would display the result of “16” as it is adding the three numbers inside the parentheses, then subtracting 5 from that total.

How do I subtract an entire column in Excel?

If you want to subtract an entire column, you can accomplish it by using the range method that we discussed in the question above about subtracting multiple cells.

As a refresher, that would be something like =A1-SUM(B1:B100), which would subtract all of the values in the first 100 cells of column B from the first cell in column A.

Alternatively, if you wanted to apply the same subtraction formula to an entire column you could type the formula into the top cell, then copy and paste it into the rest of the cells in the column.

How do I use an absolute reference for the subtraction formula?

Excel can update the row number or column letter in a formula if you copy and paste the formula somewhere else. This change will be relative to where the original formula was, so the first number or second number in the formula will adjust to try and make it easier for you to use the formula in multiple cells.

If you don’t want this to happen, then you can put a $ in front of the values in your formula, which will turn it into an absolute reference.

For example, if you had a formula like =d1-b6-2, and you always wanted to use the value in the b6 cell regardless of where the formula was, then you could change it to =d1-$b6-2.

Can I subtract numbers with the subtract formula?

While we have spent a lot of this subtraction function guide discussing how you can subtract cells from one another by using their cell reference, you can also use the Excel formula to just subtract values instead.

Excel will then display the correct answer in the cell.

This can be expanded to incorporate a large number of cells, allowing us to calculate values that include a lot of different pieces of data. For example, if you had 100 numbers in column A that you wanted to subtract from the value in cell A1, you could use the formula =A1-SUM(A2:A101).

You can learn more about creating formulas in Excel 2013 if you are ready to start unleashing the potential of your current data.

If you need to display the formula instead of the result of the formula, then this article will show you what changes you need to make for that to occur.