Deleting apps from your iPhone has long been one of the best ways to reclaim storage space. Most iPhone owners will inevitably encounter a point where they need to start deleting apps from their device, and the process has involved tapping and holding an app icon, then touching the x on the icon to delete it. This process has been in place for several different versions of the iOS operating system.

But if you have an iPhone 7 and attempt to delete an app from your device, you may have discovered an option to share the app instead. Or, in the case of some of the default apps, the ability to perform certain actions without opening the app. This is usually unexpected the first time it happens, and you may be worried that you no longer have the ability to remove apps from your iPhone. Fortunately this is not the case, and you are seeing that “Share” option because of the manner in which you are tapping and holding on the app. Your iPhone 7 has a new feature called “3D Touch” which can give you different results, depending upon the amount of pressure that you exert when you touch your screen. In the case where you are tapping and holding on an app icon, the “Share” option appears when you apply a high amount of pressure to the icon. If you were to press and hold with a softer touch, the x will appear, allowing you to delete your app. If you do not like this behavior, however, you can elect to disable the 3D Touch capabilities entirely. You can do so by navigating to:

Settings > General > Accessibility > 3D Touch > Then tap the button to the right of 3D Touch to turn it off. 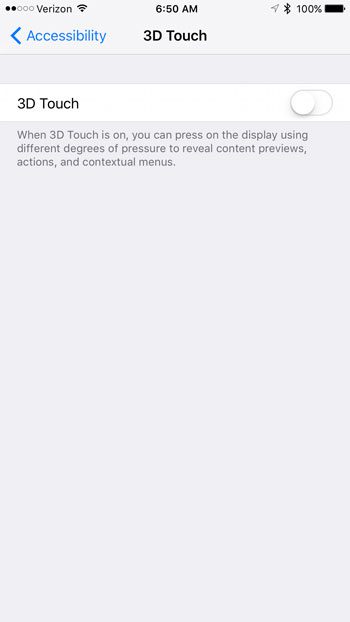 For additional information and more in depth steps for the removal of the 3D Touch option, you can read this article.