The default setting for music on your iPad 2 after updating to iOS 7 will display all of your songs. This includes a combination of songs that you have intentionally downloaded to the device, as well as the songs that you have purchased through iTunes, but haven’t yet downloaded. This is a great way to have access to all of your music without downloading every song that you own and needlessly taking up a lot of your limited storage space. Unfortunately, however, your iPad will cycle through these songs when it is on shuffle, and they will all be displayed when you are scrolling through your library. If you have purposely not downloaded a lot of your music because you don’t want to listen to it right now, then this can be a problem. Fortunately you can configure your iPad 2 so that it is not displaying music in the cloud, and instead have it only display the songs that you have downloaded and transferred to the iPad.

The Roku 1 is an excellent gift for anyone that like to watch streaming movies or TV shows, but doesn’t have an easy way to do so on their TV. Find out what the Roku 1 can do here and see why it’s going to be a really hot gift this holiday season.

Only Show Downloaded Songs in iOS 7 on the iPad 2

This is a setting that you can turn on and off at will, so if you decide later that you want to download a song to your device, you can simply turn the setting back on and download a desired song to your iPad.

Step 2: Scroll to the bottom of the column on the left side of the screen, then touch the Music option. 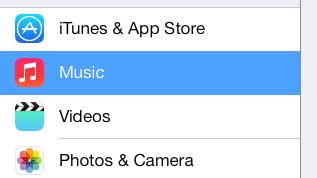 Step 3: Move the slider to the right of Show All Music from the right to the left. When the setting is turned off there will not be any green shading around the button. 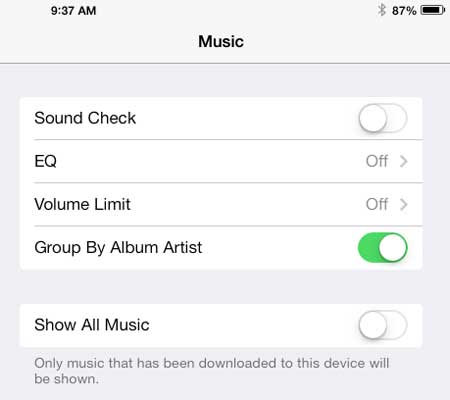 The Apple TV provides a simple way to stream videos and music from your iPad to your TV. It also makes it easy to stream content from iTunes, Netflix, Hulu Plus and more. Learn more about the Apple TV here if you’ve been looking for an affordable way to do any of these things.

We have also written about how to stop showing music in the cloud on the iPhone 5 as well.