The FaceTime feature on your iPhone allows you to make video calls to other people that are using FaceTime on their phones, tablets or computers. The feature uses your phone’s camera and your Internet connection to stream video so that the person you call can both see and hear you.

If you have attempted to make a FaceTime call on a cellular network previously, you may have been unsuccessful, or your phone may have suggested that you attempt to make the call while you are connected to Wi-Fi. This occurs because FaceTime requires a strong data connection in order to stream the video portion of the call. Video streaming is reliant upon a fast data connection to work properly, and a poor cellular connection typically cannot handle it.

But you can use FaceTime on both Wi-Fi and cellular networks, provided that your cellular carrier supports it. Not all carriers support cellular FaceTime (at the time this article was written) so you may want to contact your carrier if you have enabled FaceTime over a cellular connection, but are not able to use it. FaceTime can use a very large amount of data, however, so it is best to use it on a cellular network only if it is absolutely necessary, if the call will be short, or if you have unlimited data. The experience on a Wi-Fi network will usually be better as well, as your data connection is typically faster. Plus you won’t be using your data plan.

If you wish to configure your iPhone so that you can only use FaceTime on a Wi-Fi connection, then you can follow the steps below. Note that these steps were performed on an iPhone 5 with iOS 7, and the process may be different on devices using earlier versions of iOS. 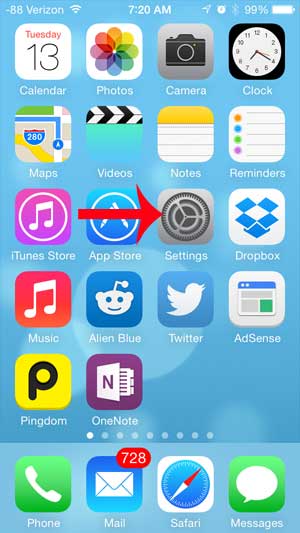 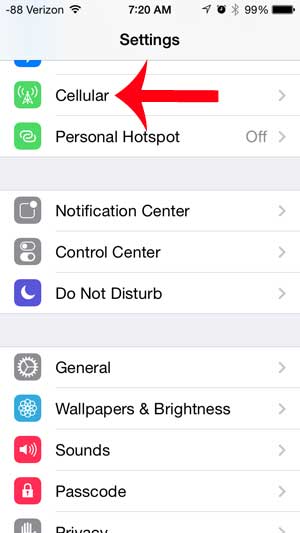 Step 3: Scroll down and touch the button to the right of FaceTime. There will not be any green shading around the button when FaceTime on a cellular network is disabled, as it is in the image below. 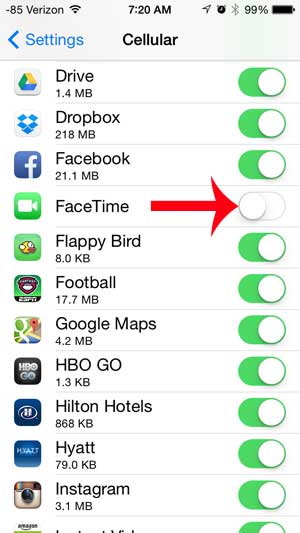 Do you have the Netflix app on your iPhone, and want to restrict that to Wi-Fi, too? Learn how to only use Netflix on a Wi-Fi network if the app is using a lot of your data by streaming over a cellular network.