Taking pictures with the camera on the iPhone is really convenient. In fact, it’s so convenient that it can easily become your primary camera. But this can result in a lot of pictures being stored on your iPhone, making it difficult to locate a specific image that you either want to send to someone or show them in person. One easy way to combat this problem is to create a new picture folder on your iPhone, also known as an album. Then you can add pictures from your Camera Roll to this new album folder to make it easier for you to find specific pictures in the future.

Pictures are often irreplaceable, so it’s important to back them up. This portable hard drive makes it easy for you to create backups of any file on your computer.

Creating a Picture Album on the iPhone 5

Albums on the iPhone are a little different than folders that you would create and use on a PC or a Mac computer. All of your images are actually stored in the Camera Roll. But when you create a new album you are also storing a copy of that picture in the new album as well. If you later choose to delete that album, the original copy of the picture will remain on your Camera Roll.

Step 2: Touch the + symbol at the top-left corner of the screen. 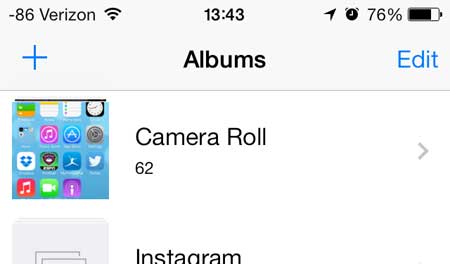 Step 3: Type a name for the new album, then touch the Save button. 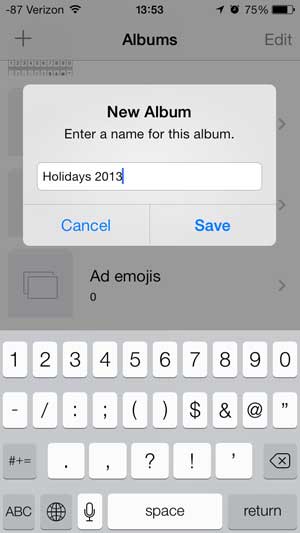 Step 4: Tap the thumbnail image for each picture that you want to add to the new album, then touch the Done button at the top-right corner of the screen. You can then open the album that you just created and view only the images that you have added to that album.

The Apple TV is a great addition to your home as an iPhone owner. You can watch videos from iTunes, Netflix and more, plus view your pictures on your TV as well.

Learn how to delete your Photo Stream pictures if they are taking up too much of the storage space on your iPhone 5.