Modern operating systems on computers and other electronic devices try to make common tasks as simple as possible. This often means placing important settings and programs in an easily-accessible location. In Windows 7, one such locations is called the taskbar.

How to Add Icons to the Windows 7 Taskbar

Even if you have never specifically added icons to your taskbar, you almost certainly have some icons there. A typical user will have an Internet Explorer icon, a Windows Explorer icon and a Windows Media Player icon, at the very minimum. But if you use a different Web browser, an email program, or any other program with any frequency, then you will appreciate having an icon for those programs in the taskbar as well.

To add an icon for a program to the Windows 7 taskbar, you will need to click the Start button at the lower-left corner of your screen, click All Programs, then browse to the program whose icon you want to add. Right-click the program, then click the Pin to Taskbar button. 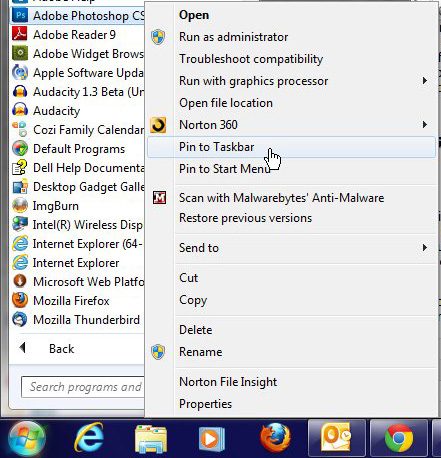 Conversely, if you want to remove a program icon from the Windows 7 taskbar, you can right-click the icon in the taskbar, then click the Unpin this program from taskbar option. You can even remove items from the taskbar that were there by default, such as the Windows Media Player icon.

How to Customize the Windows 7 Taskbar

The Windows 7 taskbar also features its’ own shortcut menu that you can access by right-clicking in an open space on the taskbar. Once you have figure out how to find this menu, you will have the ability to customize the Windows 7 taskbar in a number of ways that can help to improve your Windows 7 experience. 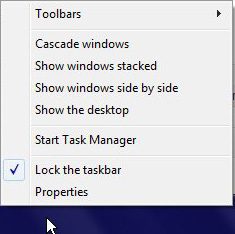 Customize the taskbar options by clicking the Properties option at the bottom of the shortcut menu. This will open a new Taskbar and Start Menu Properties pop-up window. 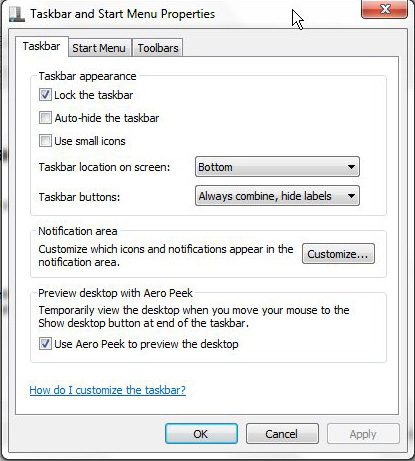