We have previously discussed how to turn off the keyboard sound on your iPad that occurs whenever you type a letter. Because, as excellent a device as the iPad might be, it does have some default settings that can become a bit of an annoyance. Among these little annoyances is the sound that your iPad makes whenever you take a picture. This shutter sound is fine in certain situations, and many users might even enjoy the confirmation that the picture has been taken. But if you do not want to hear that sound every time you take a picture, or if you are trying to take pictures discreetly, then learning to disable the iPad shutter sound can be a very helpful tool.

Like many of the other minor configuration changes that you make on the iPad, this is one that can easily be reversed once you are done. And since the method that you will be employing is actually going to mute all of the sounds on the iPad, it is probably worthwhile to undo it when you are finished taking your silent pictures.

Step 1: Navigate to the iPad screen on which the camera icon is located.

Step 2: Tap the Camera icon to launch the app.

Step 3: Slide the mute switch on the side of your iPad to the down position (the left position if you are holding the iPad horizontally.) You will see this symbol when the iPad is muted. 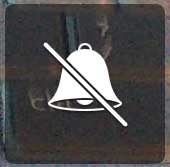 You can now proceed to take pictures without the shutter sound being played. When you have finished taking pictures with the camera, remember to slide the mute switch back so that you can hear sound on your iPad.