The first time I tried to take the Regional Rail (or train, as many Philadelphians will call it), I was a little intimidated. The train map is confusing and, once you actually get to one of the outlying stations, there is not a lot of information available to point you in the right direction. But the system actually makes a lot of sense, once you understand how it works. Plus, once you get comfortable with the system, you might be able to avoid driving to Center City entirely. This is a great way to avoid the exorbitant parking costs and the increasingly heavy traffic.

All trains are either heading towards Center City Philadelphia, or away from it.

– The Regional Rail stations have two sides. One for the train that is heading towards Center City, and one for the train that is heading away from Center City. These sides are clearly marked so, if you are unsure if you are on the correct side, just look around. A helpful tip is to get to the station a few minutes before the train is scheduled and look for other people. Trains rarely, if ever, arrive at the same station heading in both directions. If you get to a station and there are only people waiting on the other side, you are probably on the wrong side.

Familiarize yourself with your SEPTA station

– Go to the Regional Rail page and look at the Clickable Regional Rail and Transit Map to determine which Regional Rail line you want to get on. You are going to need to know the name of the station from which you want to catch a train but, once you know this, it is easy to determine your line. For example, at the center of the map is the “Wyndmoor” station, which is part of the “Chestnut Hill East Line.” 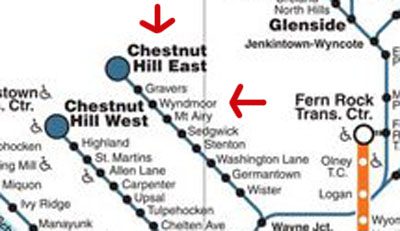 Learn how to read the schedule for your Regional Rail line

– Go to the Schedules page for your line, then click the link that applies to your situation. For example, in the image below, I want to travel to Center City Philadelphia, on a weekday, on the Chestnut Hill East line. This will bring up a new page that lists all of the stop times for each station. Find your station, then look at the times to the right of that station name. Those indicate the times that trains will be at that station.

You can pay for your ticket on the train, but you need to have cash

– The train attendants won’t require you to pay while you are boarding the train. You get on, take your seat, then they come around and collect your money. You need to tell them where you are going, and whether it is a one way or round trip ticket. Prices vary wildly depending upon the time of day, your destination and the day of the week.

** You can also buy tickets at the train station offices, but the office is not always open. If you have the option, however, this is a cheaper alternative for purchasing a ticket.

*** If you are purchasing a round trip ticket, TAKE THE TICKET WITH YOU WHEN YOU LEAVE! If you leave the ticket on the train, you will need to purchase another one when you get back on.

The Center City stations can be confusing, so give your self a few extra minutes in case you get lost

– Market East, Suburban Station and 30th Street Station are very different from the stations in the outlying suburbs and cities. They are bustling hot beds of activity, full of people who all seem to know exactly where they are going. Once you get to one of these stations to take the train back to your originating station, just look at the digital signs hanging from the ceiling and locate the Regional Rail line that you used to get to Center City. The signs will also display the time and status of the next train, as well as the track on which it is arriving. This could be something like track 2A for the Chestnut Hill East line at Market east. The track is clearly marked on the pillars, so look around the track until you locate the correct pillar.

1. Bring something to read and, if at all possible, bring something to listen to. For some reason, there are a lot of people on the train that do not understand the correct volume to talk at in a public setting. And, trust me, these people do not have interesting conversations. You want to drown them out as much as possible.

2. Look around you before you take out an expensive device like a laptop or iPad. The trains are generally pretty safe, but you have to walk somewhere after you get off the train. There are bad people in the world and, if they see you using something expensive and think they can take it from you, they might.

3. If you already have a ticket, put it in the slat on the back of the seat in front of you. The train attendant will automatically come around and punch your ticket without you needing to say anything to them.

4. Try not to carry a lot of bags or large items with you on the train, especially if you are taking a train on a weekday morning or evening. The trains can get full quickly, and you might not be able to find a place to put your things. This can lead to an uncomfortable ride.

6. The entire system is kind of like a wheel and its’ spokes. If you want to get to a station that is part of a different line, you are going to need to go to the center (any of the Center City stations), then follow the correct spoke (the rail line of which that station is a stop.)