Anyone who has ever used a desktop or laptop computer, whether it is a Mac or PC, has probably encountered a program or application that would not close, or was not functioning correctly. Windows users have the Task Manager to view and close programs, while Mac users can take advantage of the Force Quit utility. But the mobile version of the iOS operating system is a little different from the desktop version of iOS, and there isn’t a similar method for viewing a list of open applications on your iPhone 5. Your iPhone 5 also does a very good job of managing and running applications, and the review system for applications that are distributed through the App Store is very strict. But occasionally you will have an app that gets stuck or won’t close, so it’s important to know that there is a way to force quit an application on your device.

Are you looking for a way to close an app that is still running in the background? Read our article on closing open apps to learn how.

Force an iPhone 5 App to Close

One may wonder why the method described below is something that is not immediately obvious, and the answer lies in the fact that it is simply not something that you should have to do on a regular basis. All apps that are approved for distribution on a standard, locked iPhone 5 have to meet strict requirements, many of which focus on their ability to run flawlessly on your device. But problems can arise, which is why it is very helpful that Apple has included this method as a means to force quit a running app.

Step 1: Hold down the power switch on the top of your phone until you see the Slide to power off screen shown below. 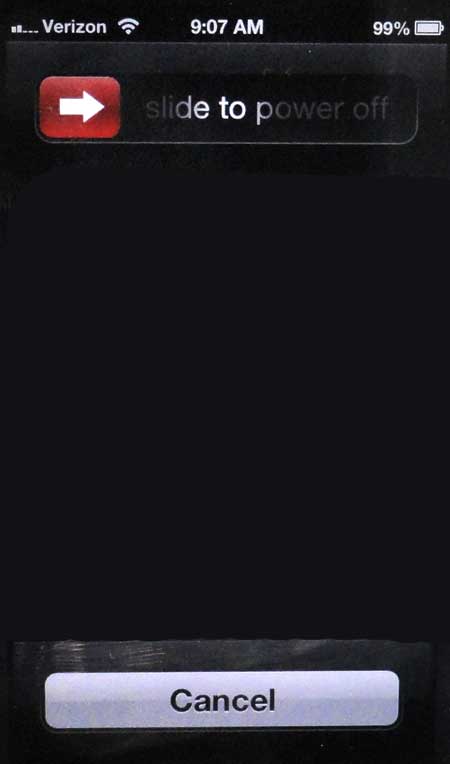 Step 2: Hold down the Home button on the bottom of your phone until the app closes. It will be about 5-10 seconds until this happens, so just keep holding the button down until the app is closed.

Once the app has been successfully closed, you will be looking at your iPhone 5’s home screen.