Commenting systems in applications like Google Slides allow for an effective way for teams to all work on a document at the same time. Multiple people all editing the some document can be a little unruly, so addressing those edits inside of comments instead can keep things a little more organized, while also allowing everyone on the team to weigh in on edits.

But you may have created a comment about which you later changed your mind, or you might have made a typographical error that you want to fix. Fortunately you can also edit comments in Google Slides so that your comment is accurately expressing your opinion.

How to Change an Existing Comment in Google Slides

The steps in this article were performed in the desktop version of Google Chrome, but will work in other desktop Web browsers like Firefox, Edge, and Safari. The steps in this guide are specifically meant to show you how to edit a comment in Google Slides, but the menu where you go to edit the slide also has a delete option if you would rather delete the comment instead.

Step 1: Sign into your Google Drive and open the Slides presentation containing the comment that you want to edit.

Step 2: Locate the desired comment in the column at the right side of the slide, then click the three dots to the right of the word Resolve. 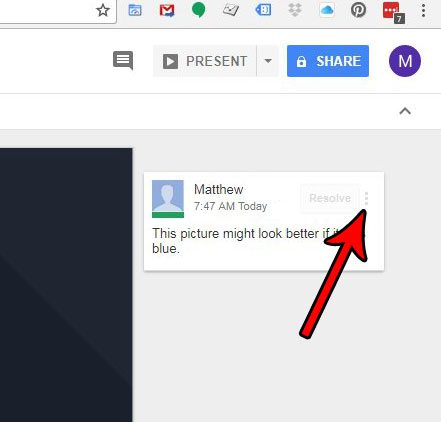 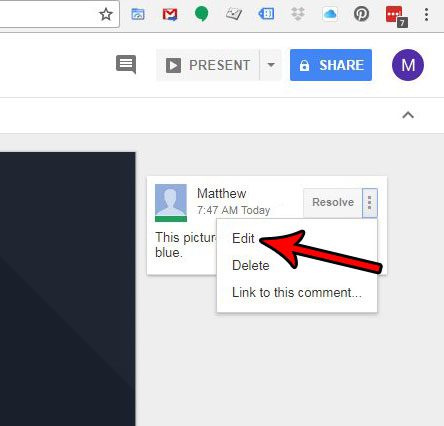 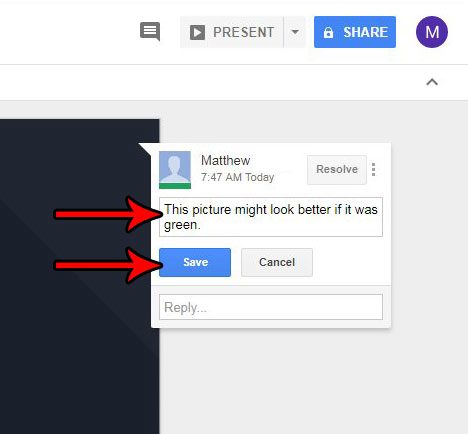 Transitions in a slide presentation are something that a team might have differing opinions about. Find out how to remove a transition from a slide in Google Slides if you have determined that you would prefer not to use one.