There are tons of apps available in Apple’s App Store, and many of them can be downloaded for free. But this can lead to an excessive amount of apps on your iPad, each of which takes up space. So if you are reaching a point where you do not have enough available space on the device to download any additional apps, or if you simply don’t like some of the apps you have downloaded, it is possible to delete some of those apps from your iPad.

One of the reasons that people have trouble deleting apps from their iPads is because the method for doing so is based on gestures. And if the majority of your computing and device experience is on non-touch technology, then performing a task with gestures is not always the obvious solution.

Step 1: Locate the app that you want to uninstall.

Step 2: Tap and hold your finger on the app until it starts to shake and an X appears in the upper-left corner of the app icon.

Step 4: Tap the Delete button to confirm that you want to delete the app and its’ data from your iPad. 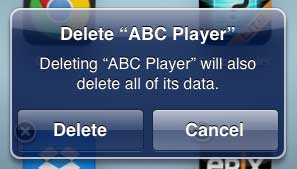 Read this article to learn how to delete an app from your iPhone instead.