Flash drives are tiny, portable file storage systems that are meant to be shared between multiple computers. You simply copy files from one computer to the flash drive so that those files can be viewed and edited on a different computer. It is one of the best ways to quickly move files.

But flash drives need to be properly ejected from a computer so that the files stored on them do not become corrupt. You can do this by learning how to eject a flash drive from your Windows 7 computer in our tutorial below.

How to Safely Eject a Flash Drive in Windows 7

Do you need a new flash drive? This 32 GB model is both inexpensive and well-reviewed.

Step 1: Click the upward-pointing arrow at the bottom-right corner of the screen.

Step 2: Right-click the Safely Remove Hardware and Eject Media icon. Sometimes this icon may actually be in your taskbar, but you are looking for the icon identified below. 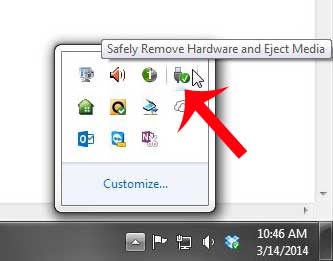 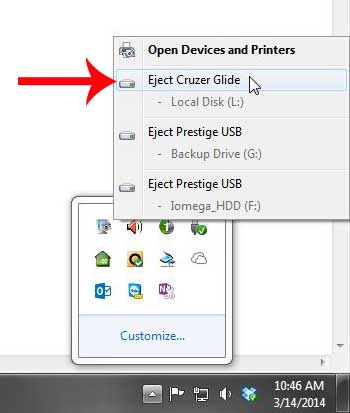 Step 4: Remove the flash drive from the computer when Windows indicates that it is safe to do so.

Are you having difficulty putting files from your computer onto your flash drive? This article can help.