Remove all Conditional Formatting Rules From an Excel 2010 Sheet

In the example image below, I have created a very small set of data. The company wants to evaluate regions where the offices are producing a per employees revenue that is lower than a specified threshold. Conditional formatting has been applied to highlight the offices that are below that threshold.

I have received this spreadsheet without any explanation of the formatting, so the highlighted cells mean nothing to me. Repeated attempts to remove the background fill color have been unsuccessful, because that fill color is set by conditional formatting.

I can find a utility to remove all of the conditional formatting rules from this entire sheet by clicking the Home tab at the top of the window. Next I will click the Conditional Formatting drop-down menu in the Styles section of the ribbon, then I will click Clear Rules, followed by Clear rules from entire sheet. 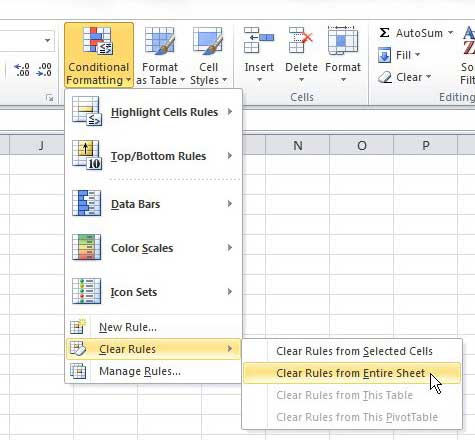 This will remove all of the pre-existing rules and formatting from the spreadsheet, allowing you to make your own changes to the appearance and formatting of your cells.

If you have made the conditional formatting rules that are applied to the sheet and you use the method outlined above, all of the rules you created will be gone. You will need to recreate them and reapply them to the cells that you require.