Your iPad 2 has a number of its’ adjustable settings configured with both performance and battery life in mind. One configurable option that factors heavily into both of these aspects of your iPad experience is the screen brightness. Increasing the brightness can make it simpler to see certain objects on your screen and improve the appearance of some video, but it will also decrease the battery life. If you want to learn how to change the brightness on your iPad 2, then you can take control of your battery life and your screen brightness simultaneously. This is a great way to either improve the appearance of your screen or extend the amount of use that you get out of one battery charge.

Step 1: Touch the Settings icon on the Home screen of your iPad 2.

Step 2: Tap the Brightness & Wallpaper option at the center of the column on the left side of the screen. 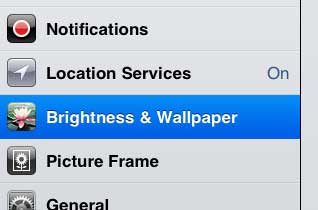 The screen will automatically adjust as you move the slider, so you can get an idea as to how your adjustment is affecting the screen appearance. You will notice that there is also an Auto-Brightness setting that is turned on by default. This will sense the lighting environment in which the iPad is being used and adjust the screen brightness accordingly. Auto-Brightness will take your custom brightness settings into account, but will tweak your adjustments if you are in a high or low light environment.