Microsoft Office programs typically include a ruler as a means for you to properly size your documents and position objects symmetrically. Since your printed document is often not exactly the same size as what you see on the screen, this can help to remove the disconnect between the digital document and its physical counterpart.

But the ruler takes up a bit space on the screen, and it may not always be important for your current project. Fortunately the ruler is not a permanently fixed part of Powerpoint 2013, and you can hide both the vertical and horizontal rulers by changing one setting.

Hiding the Vertical and Horizontal Rulers in Powerpoint 2013

The steps below will hide any of the rulers that are visible in Powerpoint 2013. If you decide later that you would like to use the rulers again, simply follow these steps and check the box that we will be unchecking in a moment. 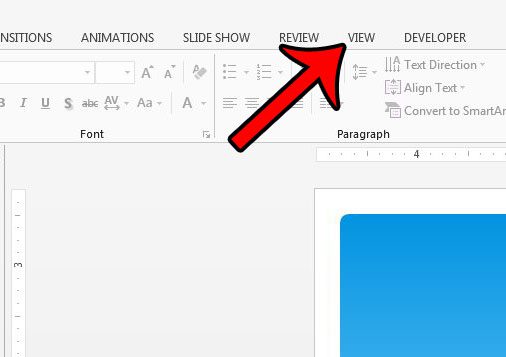 Step 3: Click the box to the left of Ruler in the Show section of the ribbon to clear the check mark. 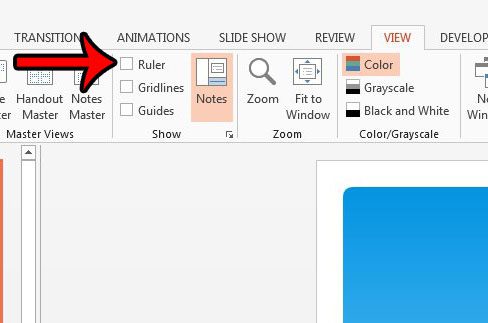 Both the vertical and horizontal rulers should now be hidden from view.

Are the slides in your presentation in the incorrect order? Learn how to rearrange the order of those slides without needing to delete and redo a lot of work.