Starting with Excel 2007, Microsoft changed the way that you navigate menus and make changes to your spreadsheets. This included changing the menu structure from traditional drop-down menus to a navigational ribbon that changes as you click the various tabs at the top of the screen.

Minimize the Navigational Ribbon in Excel 2013

The steps in this article were performed in Microsoft Excel 2013. Earlier versions of Microsoft Excel can also minimize the ribbon using a similar method, but the screens will appear slightly different than those shown below.

Following the guide below will change the settings in Excel 2013 so that the ribbon is not visible by default. However, you will see the ribbon when you click one of the tabs at the top of the window. The ribbon will then disappear once you click somewhere on the spreadsheet itself. You can unhide the ribbon by following these same steps.

Step 2: Right-click in an empty space on the ribbon, then click the Collapse the Ribbon option. 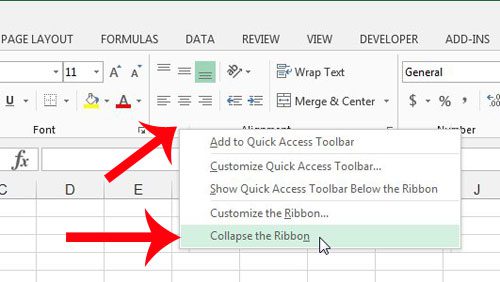 Note that this change will carry over after you close Excel.

Would you also like to hide the formula bar that displays under the tabs? This article will show you how.