We’ve reviewed a lot of different devices that you can connect to your TV in order to watch different streaming services, such as the Roku 3 and the Apple TV. But if you already have a computer with an HDMI port, you can connect that to your TV and use the television as a monitor. You will still need a way to control it from the couch, however, and that’s where a wireless keyboard and mouse combo, like the Logitech wireless combo mk520 comes into play.

Using the Logitech MK520 with a Laptop or Desktop

While the purpose of this article is to point out the usefulness of the Logitech MK520 when used in combination with a TV as a monitor, the mouse and keyboard still function well in a traditional computer setup.

It also has the benefit of eliminating a couple of cables, although it will require you to use one of your USB ports for the USB receiver dongle that connects the keyboard and mouse to the computer. However, this is still one less USB port than you would need if you had a wired mouse and keyboard connected to the computer. 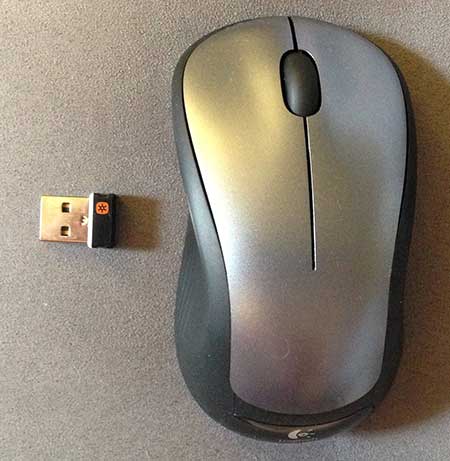 The biggest concern that I had while I was shopping for a mouse and keyboard was the size of the mouse. I really dislike tiny mice, such as those travel mice that are designed specifically for laptops, and wanted one that was closer to the size of a traditional wired desktop mouse. Fortunately the mouse in the MK520 fits that bill, as you can see when it is compared to an older standard Dell mouse. 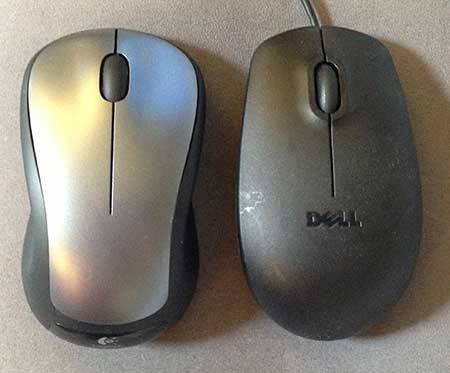 The keyboard is pretty standard, and typing is comfortable. It’s the same size as a typical desktop computer keyboard, and has a 10-digit numerical keypad at the right side. There are pop-up stands on the back of the keyboard that allow you to raise the angle by 8 degrees. There are also dedicated audio controls at the top, as well as dedicated functions associated with the F-keys.

Both devices require AA batteries. The keyboard needs two, and the mouse needs one. Each device has its’ own power switch, which will allow you to extend the battery life for an extended period of time. I’ve been using mine for about three months and haven’t had to change the batteries on either the mouse or the keyboard.

You can use either the mouse and keyboard separately or together, so if you have your computer hooked up to your TV and you are watching Netflix in the browser, you can simply use the mouse to navigate the interface without also having the keyboard turned on.

So if you have a desktop or laptop computer that you can connect to your HDTV with an HDMI cable, then I highly recommend the Logitech MK520 combo. Both devices have good range, the mouse and the keyboard are both comfortable for prolonged use, and you can even save a USB port if you are replacing a wired mouse and keyboard.

Click here to learn more about the Logitech MK520 and check pricing.