have you ever Shazam’d a song to find out what it was, only to close the app and see a red bar at the top of the screen? This occurs when the Auto option is enabled in the Shazam app. This can be helpful if you want to allow Shazam to automatically identify music or TV shows, but you may prefer to stop the Shazam app when you elect to close it.

The steps in this article will help you find the simple option that you need to turn off so that the Shazam auto-detect feature will no longer function.

Turn Off Auto-Detect in Shazam

The steps in this article were written using an iPhone 5 in iOS 8, with the most current version of the Shazam app at the time this article was written.

This article will assume that the red bar is already visible at the top of your screen, as in the image below. Step 2: Touch the Shazam button at the bottom of the screen. 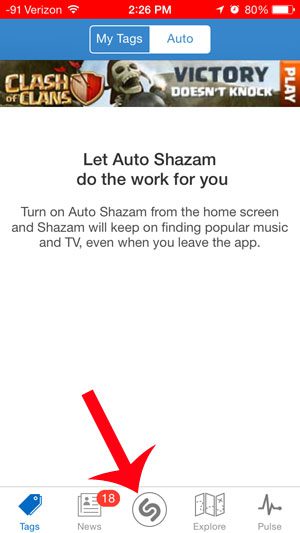 Step 3: Touch the button to the right of Auto at the top-right of the screen. The auto feature is turned off in the image below. Now you will be able to close the Shazam app without seeing the red bar at the top of your screen, indicating that the app is still listening for music or TV.