If you have an iPhone 4S or newer, an iPad 2 or newer, or an iPod Touch 5th generation or newer, then you are probably aware that they can be updated to iOS 8. The new version of Apple’s operating system includes a host of new features, some of which you may have already decided that you want to use. For example, Apple now allows users to install third-party keyboards, such as Swype. You can learn how to install Swypee in iOS 8 with this article.

But updating to iOS 8 can be more difficult than it originally appears, especially if you have been using your iPhone for at least a few months. All of the pictures, music and apps that are on the device take up a considerable amount of room. This can be even more of a problem for iPhone owners that have a 16 GB model, as those devices have an extremely low amount of space to begin with.

The most common method for installing iOS updates on the iPhone is the wireless option. This is also called OTA (over the air) and means that you download the update to your device wirelessly, then you install it from the downloaded file. The exact amount of space that you need available on your iPhone 5 in order to install iOS 8 via the OTA update can vary based upon the current state of your device. For example, when I updated my iPhone 5 to iOS 8, I needed 4.6 GB of free space. 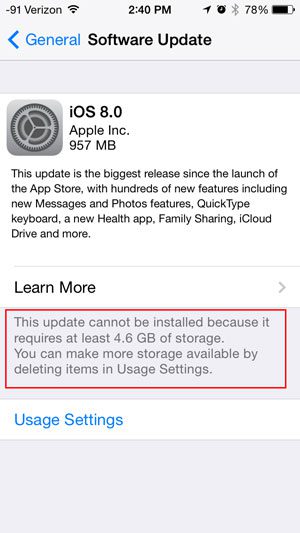 The typical amount of necessary space for iPhone 5 users that want to update to iOS 8 seems to fall between 3 and 5 GB, on average. You can also elect to update through iTunes, if you would prefer not to do it wirelessly. Instructions for installing iOS 8 through iTunes can be found here.

Many people do not have anywhere near this much free space on their device, so there is a strong possibility that you will need to delete some stuff. This article will show you how to delete some of the items on your iPhone that might be taking up the most space.