The beauty of Photoshop CS5 lies in its’ ability to combine different layers into one image. You can edit each image layer individually to achieve your desired results without affecting the rest of the image properties contained on different layers. Typically you will not need an image layer outside of the image of which it is currently a part, but you may occasionally find yourself wanting to save a really well designed or striking layer for a future image. Fortunately you can export layers in Photoshop CS5 as their own separate images, allowing you to create a new file that only contains the image objects that you have added to a specific layer.

Save a Photoshop Layer as an Image

A layer in Photoshop is essentially its’ own image, it has just been organized into a system where its’ elements are combined with the other layers of a file to create one large image. If you were to copy everything on one of your Photoshop layers to a single layer image editing program, like Microsoft Paint, you could easily save a layer as a distinct image. However, in Photoshop, you would need to do a lot of hiding and deleting to dwindle a multi-layer image down to only the one layer that you want to save. This is counterproductive and could accidentally lead to you losing the rest of your image. Luckily Photoshop has incorporated a method into the program that makes it possible to export each image layer as its’ own image.

Begin by opening the image file that contains the layers you want to export. 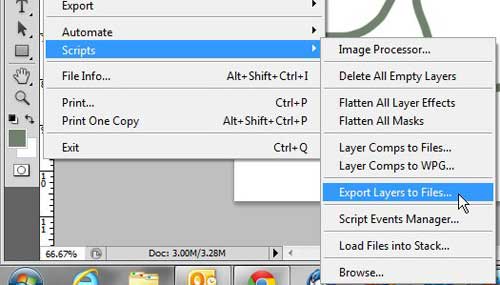 Click the Browse button at the top of the window, then select the location on your computer where you want to store the exported image files.

Type a prefix for the file names that will be generated into the File Name Prefix field. Photoshop CS5 will add a suffix to the end of the prefix you specify based upon the name of the layer it is exporting.

Check the Visible Layers Only box if you only want to export the layers that you can see. 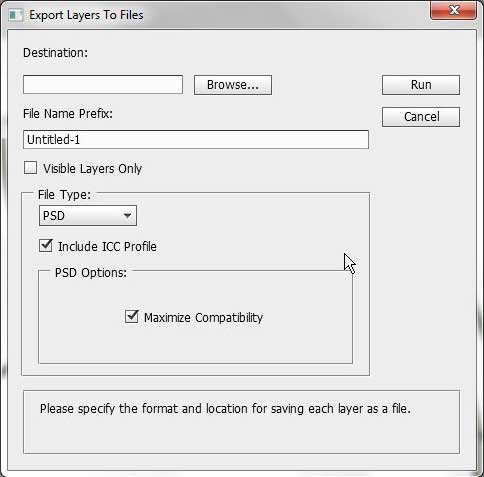 Click the drop-down menu under File Type, then choose the type of files that you want to create from your exported files.

Once you have finished making all of your selections, click the Run button at the top-right corner of the window.