Managing storage space on your iPad is an important part of owning the device, particularly if you have a lot of movies and TV shows that you want to keep on the tablet. This is made even more troubling due to the fact that the amount of space inside the iPad is fixed, meaning that you cannot upgrade to more space in the future if necessary. Sure, you can use a service like Dropbox to manage a lot of your files in the cloud, but you won’t have access to those files if you are somewhere that you cannot get Internet access, such as a plane, or while driving in a car. So unless you plan to buy a new iPad with a larger hard drive capacity once you have used all of the space on your current one, it is important to be able to see how much space you have used on your iPad, as well as how much space is left.

The utility that Apple has provided for checking your available space is far more helpful than simply providing two separate values for the amount of space used and the amount of space left. It will also let you know which apps are using the most space, so you can delete an app or game that you aren’t using anymore if it is preventing you from loading more data on the device. You will also be able to check the amount of space usage for your iCloud account, as well as view usage statistics for the iPad.

Step 1: Touch the Settings icon to open the menu.

Step 2: Tap the General option in the column at the left side of the screen. 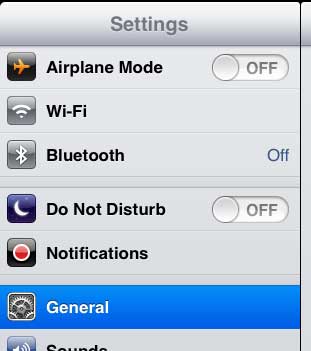 Step 3: Press the Usage option at the top part of the column at the right side of the screen. 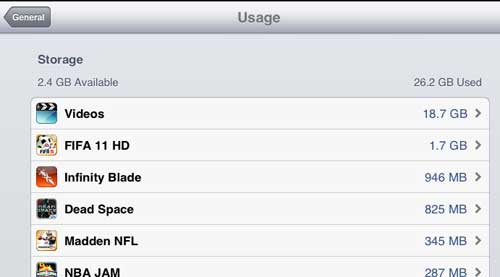 Under the Storage wording at the top of the screen, you will see two numbers – the amount of space available, and the amount of space used. You will notice that these two numbers, when added together, are actually less than the capacity of the iPad that you own. For example, these images were taken on a 32 GB iPad, but the total amount of space only equals 28.6 GB. The remaining space is taken for system files that cannot be deleted or uninstalled.

Would you like to be able to manage and access your iCloud data from a Windows computer? You can read this article to learn about an application that you can install on your PC that will allow you to do just that.