Once you have started using an iPhone that includes Apple’s popular voice-controlled assistant, one of the first things that you will want to learn is how to use Siri. She can help you to perform many common tasks on your iPhone with voice controls, and she is constantly improving.

Siri can perform many of the tasks that you need to do on your iPhone, and her ability to do so through only voice commands makes her very convenient. So continue reading below to learn the basics about working with Siri and how you can start using her.

Using Siri on an iPhone in iOS 7

Siri is remarkably capable, and there are many different things that she can do on your iPhone. Simply activating Siri and saying what you want to do is usually an effective way to accomplish your task, but you can read this article to learn more about Siri on an iPhone.

Step 1: Touch and hold the Home button under your iPhone screen. It will bring up a screen that looks like this. 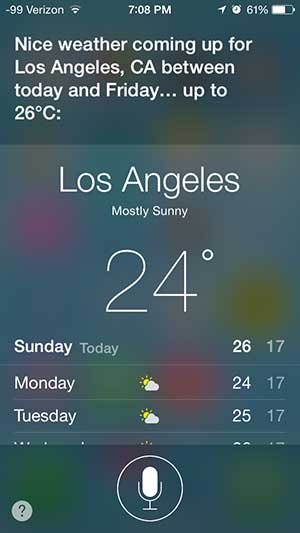 Step 2: Speak a phrase into the microphone that indicates what you want Siri to do. For example, you could say “What is the weather like in Los Angeles?” and it would bring up a weather report, as in the image below. 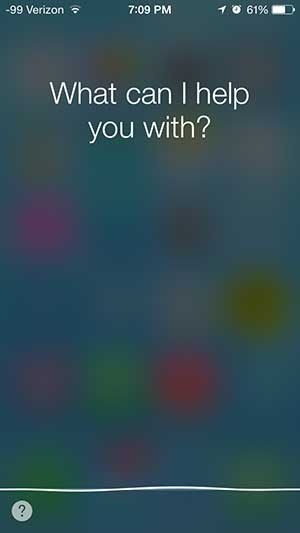 Siri understands a lot of different context, and can perform many of the functions that are integrated into your phone. Some examples of things that she can do include:

Using Siri effectively simply boils down to being able to tell her what you want, and speaking in a clear, understandable voice. You can have difficulty getting Siri to understand you in environments with a lot of background noise, or getting her to understand certain words.

She can be a very useful tool on your iPhone, so it is worth experimenting to see what she can do to help you.

You can change some of Siri’s settings, including the voice. This article will show you how to modify that setting.