There are many reasons why you might want to hide a row in Excel 2013, but the fact remains tat sometimes there is data contained within a spreadsheet that you do not want to delete, but which does not need to be shown to your current audience.

Hiding columns or rows in Excel is the perfect solution to this situation, as your data is still technically part of the spreadsheet, and any formulas that reference cells contained within those hidden rows or columns will still display properly. But a hidden row will not be visible when the spreadsheet is printed or viewed on a computer screen, allowing you to focus the attention of your readers on the data that you have chosen to leave visible.

Is your computer a little sluggish while running Excel, or have you been thinking about upgrading to a newer model? Amazon has an incredible selection of laptops at affordable prices. Check out their best-selling laptops here.

Hiding a Row in Microsoft Excel 2013

Step 1: Open the spreadsheet in Excel 2013 that contains the row that you want to hide.

Step 2: Click the row number at the left of the spreadsheet to select the row that you want to hide. I am hiding row 3 in the example image below. 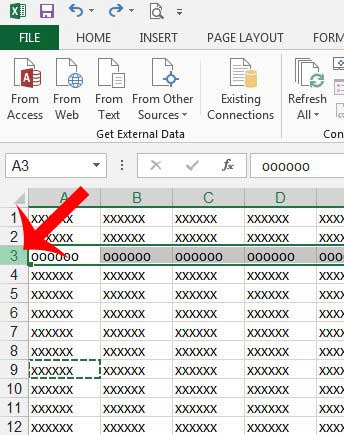 Step 3: Right-click the row number, then click the Hide option. 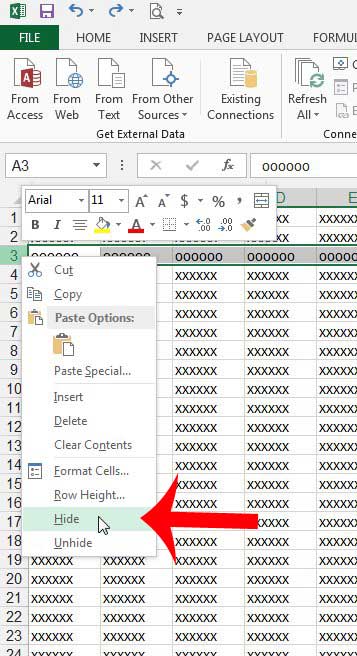 The numbering of your rows should now skip the row that you just hid. 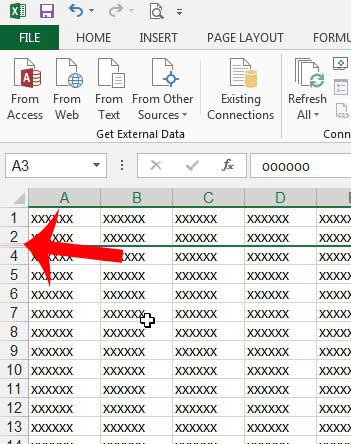 You can learn how to unhide a hidden row or column by following the steps in this article.

Are you printing a large spreadsheet that is difficult to follow on each page due to a lack of column headings? Learn how to print the top row of your spreadsheet on every page in Excel 2013 to make the data on each page simpler to read.