The Apple TV is an awesome little device that is going to give you a lot of new ways to watch movies and TV shows on your television. But perhaps one of the best reasons to purchase an Apple TV is the compatibility that it offers with other Apple products like the iPad. You can stream videos from your iPad to your Apple TV over your wireless network and watch those videos on your TV. You can learn how to use AirPlay to watch an iPad video like that by reading the steps below.

AirPlay is a feature that will work with any compatible Apple device, provided that the device and the Apple TV are on the same wireless network. If you have an AirPlay capable device and your Apple TV is set up, then you need to check that AirPlay is enabled on your Apple TV.

Step 1: Confirm that your TV and Apple TV are turned on and that the TV is switched to the input channel to which the Apple TV is connected.

Step 2: Touch the Videos icon on the iPad.

Step 3: Select the type of video at the top of the screen that you want to watch on your TV with AirPlay.

Step 4: Select the video that you want to watch, then touch the Play button.

Step 5: Touch the TV icon at the bottom-right corner of the screen. 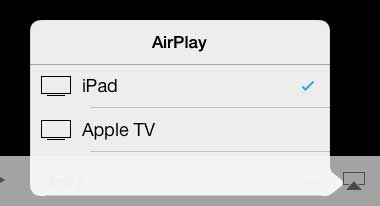 Looking for something similar to the Apple TV that is less expensive? Read our review of the Roku 1 to learn about a much less expensive box that can stream videos from the Internet.